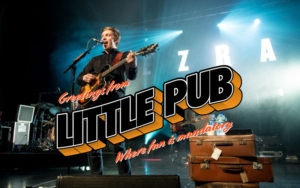 Want to see Geroge Ezra at Little Pub? Hit the link below for details.